Recently, the world as you knew it came to an end. Your isolated mountain community was once an idyllic haven for those citizens who wanted to live life on their own terms. Then the peace was shattered by an explosion just south of town, and the next thing you know the streets were crawling with the undead. Crazed zombies prey on anything that moves, and only those who fast enough or lucky enough to escape infection have managed to stay alive.

In the world of Zero Signal, the zombie apocalypse has arrived at Gavin’s Peak, and it’s only a matter of time before it spreads. Survivors are organizing into camps and scrounging for food and supplies, but more than survival is at stake. The explosion at the nuclear power plant just south of the city took out more than just the electrical grid; it also destroyed the only highway leading into or out of town. An electromagnetic pulse fried many electronics and initiated a communications blackout.  While this has made it virtually impossible to escape the city, it has also managed to trap the infection inside. For now. 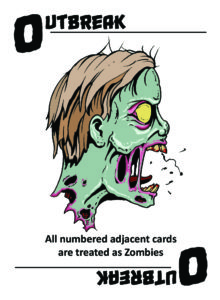 The newest product from PT Publishing is the first of our new Zero Signal series of tabletop games. Inspired by some of our team’s exciting zombie-related RPG experiences, Zero Signal begins with an outbreak in a remote mountain community, cut off from the rest of society. Though we are currently working on several possible titles for this projects – including a semi-cooperative board game that we believe will offer a new and interesting twist to the zombie outbreak scenario – our first game is a fun, simple card game called Zero Signal: Supply Run.

Predictably, Supply Run focuses on the basic mechanism of survival during the early weeks of the zombie apocalypse. The core game as it currently exists for playtesters is based on a 54-card deck and can provide a quick 15-30 minute game for 2 to 4 players, age 8 and up. Most of the cards fall into one of four “suits” that define their role in the game: Food, Supplies, and Weapons that the players gather from the city streets… and Zombies. Food and Supplies are the point cards players gather to build up their stockpile, while Weapons can be used to take down the Zombies who threaten to overrun the city. And trust me, it’s inevitable. Your job is just to gather more goodies than the other guys before it happens. Additionally, a series of specialty cards – like the Bomb card that can take out a whole section of the grid, or the titular Supply Run card that allows you to steal cards from an opponent’s hand – add a bit of spice to the game.

Much of the design work for the basic game has been completed, with refinements added by numerous playtesters who have heaped considerable praise on the project. A Kickstarter campaign is pending to help raise enough money for a solid print run and provide us a fun opportunity to expand on the core products with stretch goals and add-ons. We hope to raise enough funds to improve the overall product for everyone and offer some exclusive options to gamers interested in building on the fun at their own table, with things like playmats and deluxe editions of the game.